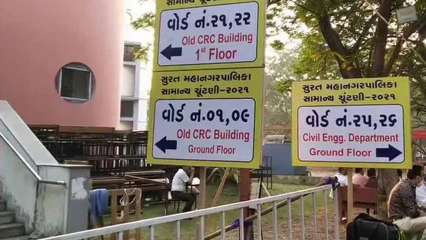 The counting of votes for the six municipal corporations of Gujarat began at 9 am on Tuesday and is still ongoing. As per the latest trends, the Bharatiya Janata Party (BJP) was leading in over 200 seats till 12 noon, while the Congress was leading in 42 seats.

The BJP is leading the wards of Jamjodhpur, Thaltej, Vastrapur, Asarwa, Saizpur, Nava Wadaj and Navarangpura in local body elections. On the other hand, Congress is leading in Dariyapur and Chandkheda wards, while All India Majlis-e-Ittehadul Muslimeen (AIMIM) is leading in Behrampura ward.

The Gujarat local body elections were voted on Sunday. The State Election Commission (SEC) has said that an average of 46.08 percent polling was held during the polling, which took place between 7 am and 6 pm.

It may be noted that a total of 2,275 candidates are in the fray in the six metropolitan councils, whose fate will be decided today. Of these, 577 are from BJP, 566 are main opposition Congress, 91 Nationalist Congress Party, 470 Aam Aadmi Party, 353 from other parties and 228 are independents. Several municipalities, zilla panchayats and taluka panchayats of the state will vote on February 28 and counting will take place on March 2.

DNA Explainer: All about Gupkar alliance and its impact on politics of Jammu and Kashmir

Jammu and Kashmir: Army soldier kills himself in Kupwara camp, third such incident in two weeks