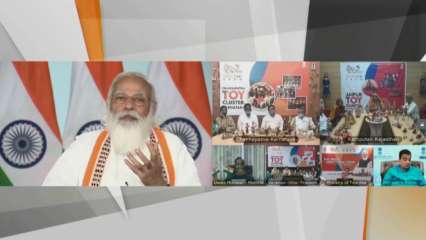 Prime Minister Narendra Modi on Saturday said that the country’s ancient toy culture reflects the practice of reuse and recycling, which is part of the Indian way of life, adding that India has the ability to take back environmentally friendly toys to the world.

Speaking at the India Toy Fair 2021 in Delhi, the Prime Minister said that the government has prepared a National Toy Action Plan. It includes 15 ministries and departments to make the industry competitive, self-reliant, and to provide it with a global platform.

1. “This first toy fair is not just a business or economic event. This event is a link to strengthen the country’s old culture of sports and grandeur. India’s toy culture is as old as the Indus Valley Civilization. The world studied Is. Mohenjo-daro and Harappan era toys, “said PM Modi.

2. The Prime Minister said that India has given the world some of the most popular games like chess and Ludo. “Chess, which is very popular in the world today, was first played in India as ‘Chaturanga or Chaduranga’. Modern Ludo was played as ‘Pachisi’. Our scriptures also show young Lord Rama and Lord Krishna There is a description of the toys., “He said.

3. PM Modi said that even today Indian toys are simpler and cheaper than western toys and appealed to manufacturers to make toys that are better for both ecology and psychology.

“Try to use less plastic in toys. Use things that can be recycled,” he said.

4. The Prime Minister also said that Indian toys contain elements of science, entertainment and psychology. Giving an example, he said, “Take the Lattu (top) as an example. When children learn to play with the Lattu, they learn about gravity and balance. In the same way, inadvertently playing with the catapult. The child starts learning about kinetic energy. And potential energy. Puzzle toys develop strategic thinking and problem solving thinking. “

5. PM Modi said that the new national education policy also includes sports based and activity based education. He said, “It is an education system in which logical and creative thinking between children and children can be enhanced. Special attention has been paid to this.”

6. The Prime Minister said that in the field of toys, India’s tradition and technology is coupled with concepts and potential. He said, “We can move the world towards environmentally friendly toys. The National Toy Action Plan has been prepared, which includes 15 ministries and departments to make the industry competitive.”

7. He said that the demand for ‘Made in India’ and ‘Handmade in India’ is gradually increasing in the world and today people buy toys not only as a product, but also to connect with the experience associated with it. Too.

In his “Mann Ki Baat” address in August last year, the Prime Minister said that toys not only increase activity but also give flight to aspirations.

The four-day fair, from 27 February to 2 March, aims to bring together all stakeholders including buyers, sellers, students, teachers, and designers to build lasting relationships on a virtual platform and encourage dialogue for the overall development of the industry.

Through this forum, the government and industry will discuss how India can be made the next global center for toy manufacturing and sourcing to attract investment in the region and boost exports.

Over 1,000 exhibitors from 30 states and union territories will display their products in e-commerce enabled virtual exhibitions. It will feature traditional Indian toys as well as modern toys including electronic toys, plush toys, puzzles and games.

The Toy Fair will host numerous webinars and panel discussions with many Indian and international speakers, with proven capabilities in toy design and manufacturing.

To make India self-reliant in toy manufacturing, the fair is being organized in accordance with the vision of Prime Minister Narendra Modi.

COVID-19: Over 3,000 cases in Kashmir, oxygen supply to industries banned

COVID-19 vaccination: Beneficiaries have option to walk in, register on-site from THIS date, details here

COVID-19: Lockdown extended by 7 days in these cities of Maharashtra - What's allowed, what's not

Trevor Bauer finds himself at the Center of Ball-Doctoring Inquiry

The Premier League race is over. The Champions League lottery is here.